Have you ever wondered where does the term ‘Goldilocks’ comes from? The Goldilocks principle has been derived from the English fairy tale of the 19th century. There is a story named – ‘The Three Bears’, where a young girl called ‘Goldilocks’ tastes three different bowls of porridge and she prefers the porridge that is neither too hot nor too cold but has just the right temperature. This concept of ‘just the right amount’ finds its various applications and one such promising perception is found in ‘Astronomy’.

‘Goldilocks zone’ also known as ‘Habitable zone’ in astronomy defines the area around a star that is neither too hot nor too cold for liquid water to exist on the surface of surrounding planets. This definition has relied based on finding liquid water, this is because water is very much essential for a life to exist. Million years ago, even on earth, the first creature such as amoeba was found in water. This gives us the importance of life's existence due to water. Hence, the same principle is followed even in exploring life on other planets.

Could we imagine what could happen to all of us if Earth was present in place of Mercury? We all could burn within seconds. This is because the distance between Sun and Mercury is so close that the surface temperature experienced by Mercury during the day is 430 degrees Celsius. On the contrary, what could happen if our Earth was located where Pluto dwells. Just for a second, we think wow! it is so cool. But practically thinking, Pluto is the farthest and coldest celestial body in our solar system. The average temperature during the day on Pluto is minus 223 degrees Celsius. Here, we all would be dead due to freezing within no time. Now let us come back to our Earth which is aptly placed in the Solar System where we don’t feel either like on Mercury or like on Pluto but just at the right condition where we all are happy and comfortable with warm sunny days and cozy cold nights. Let us take a moment to look around us and feel thankful to the Universe for placing us at the right position in a – Habitable zone, where we can live and survive. 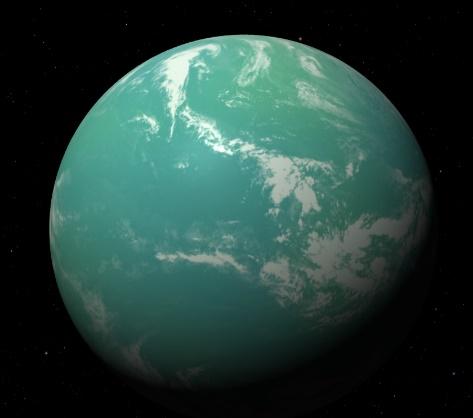 Nevertheless, we humans are always curious and want to explore Earth-like planets elsewhere, beyond the Solar system. Therefore, the quest of searching for twin siblings for Earth has begun by our scientists. Scientists have discovered many Earth- like planets which have given us hope. But the challenge is they are billions and millions of kilometer away from us. To reach them, we need to travel at the speed of light! Yes, you heard it right- the speed of 300,000 km/s is how fast the light travels. For example, to reach an Earth-like planet called Kepler -16b it takes us around 245 years if we travel with the speed of light. Unfortunately, we cannot make this with our current engine technologies. Therefore, the young minds have to think out of the box and chase such Earth-like planets which could be done only in our dream today.